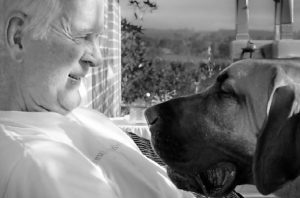 They say you can tell a man’s heart by how he treats his dog. And if that’s true then Rob Burgess’s heart was solid gold. The Cobargo community would have seen Rob walking his Great Dane, Jensen, up and down the street on a regular basis until just a couple of months ago when his advancing cancer put an end to that.

I got to know Rob when he started bringing Jensen down to Quaama two or three times a week to play with our big dogs at the cemetery. He would trundle down the highway at 40kph in his Citroen Deux Chevaux, Jensen’s huge head poking through the sunroof, tongue lolling. That was little more than a year ago but it didn’t take long to appreciate the lovely, heartful softie inside that big ex-cop exterior.

Rob died on Friday 17 May at Bega Hospital after a rollercoaster of surgery, radiotherapy, hope, despair and optimism since his melanoma came romping back last summer. Throughout it all his love for his wife Pam, his sons Matty and Sean, and of course for Jensen, shone through.

As for us doggie friends, we’re just grateful to have had him in our lives this past year.